I’m an 18-year-old pacifist girl living in Canada, mandated to register for “Selective Service”, the military database of all American males.

Unfortunately, that wasn’t a typo.

As a Quaker, I hold peace as a highest virtue, alongside equality, integrity, sustainability, community, and spiritual simplicity. Where far too many mainstream churches spend sermons decrying “homosexuality”, recent announcements at Meeting for Worship included an affirmation of the LGBT community. Where others vigorously support wars overseas, we support vigorous peaceful protests for climate justice.

I’m a conscientious objector to all forms of war. Understanding that every being has the divine within them is incompatible with the mass destruction inherent in the selfish wars that plague humanity, fought only for material self-interest – often veiled by religious conviction – to the detriment and destruction of humans and non-human nature alike.

My principles and United States federal law may not align.

Though the draft has not been used in decades, “Selective Service” remains a dossier of American “men” eligible to be conscripted into the American military. Make no mistake, Selective Service is as selective as the PATRIOT Act is patriotic.

What does the United States federal government say for itself?

So as a United States citizen and a girl – a trans girl, yes, but legally and medically a girl – I am required to register. On the other hand, as a woman, they do dedicate an entire page to proclaim:

That isn’t good enough for the military, is it? What do they think of me as a Quaker – morally, ethically, and religiously opposed to militarism and war of all forms?

[M]en who are religiously or morally opposed to participating in war as a conscientious objector must still register with the Selective Service System. There is no classification for conscientious objection until Congress and the President vote for a return to conscription.

The choice is mine. One side betrays my identity and my principles, and the other violates the law. Thank you, Uncle Sam. But conscription won’t happen, will it?

Alas, notice the preposition. Until Congress and the President vote for a return to conscription. Not if or unless, but until. The system is predicated on a return to conscription. I will not lie about the future. In the draft, in the riots full of good people on both sides, in the presidency, the writing is on the wall. The fascists are fighting.

And if we let them win, the fascists will find me – in the name of the Christian God of Love – and convict me as treasonous for my heretical nonviolent Quaker ideology, for my transgender identity, for speaking out.

They will find you too.

Out of their Christian love, they will arrest me, let the world know of my crimes – for I dared to proclaim, “Blessed be the peacemakers”, everyday libel against their Christianity.

So I registered. The form has a sex field – how progressive – so I selected “female”: 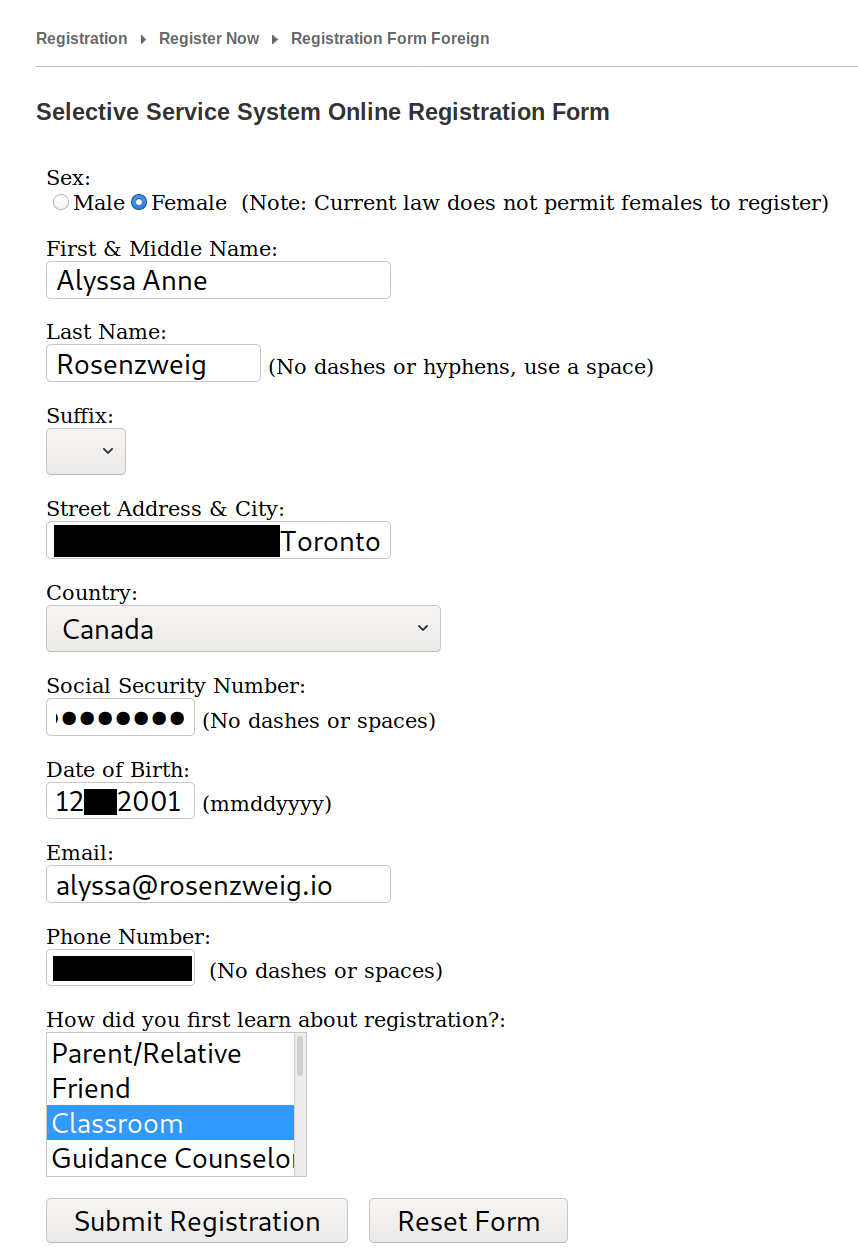 Theoretically. In practice with JavaScript enabled, the moment you click “female”, you are immediately redirected to the helpful page: above:

On the subject of constitutionality, in the February 2019 court case National Coalition for Men v. Selective Service System, a district court ruled that the male-only draft is unconstitutional. The case was appealed, though for the government, the ruling is irrelevant, a liaison stating “until we receive guidance from either the court or from Congress, women are not required to register for Selective Service.”

Am I not woman enough for you?

Nevertheless, pressing on, I fill out the form from scratch, this time choosing “male”. Registration succeeds, and I’m greeted by a wonderfully affirming page:

I’m sorry, but Mr. Rosenzweig is definitely over twenty-six years of age! My Dad isn’t eligible to be drafted.

Only men register for Selective Service, but since I’m trans, I have to register too so the President and Congress have the option to force me into the United States military.

Never mind that under President Trump, transgender people are effectively forbidden from serving in the military under Directive-type Memorandum-19-004. A May 2019 Gallup poll found 71% of American adults oppose the policy – and yet the policy is in place, democracy in action.

Still, the purposeless deed is done. I am registered. I have my number.